Sister does not mean a biological sister, for even today Black people call any Black woman around their age sister.

My Family and Me!
I was born in the late 700's to my parents, King Kashta and Pebatma. I was given the birth name of Piankhi, but people just call me Piye... As I followed my father's footsteps in becoming king, I received my throne name Men-kheper-re meaning: "The Manifestation of Re Abides." I have a lovely and charming sister too named Amenerdis I. She was adopted by Shepenwepet I who was "God's Wife of Amun." My other sister, Peksater, is my wife and i love her so!!! I have a dear brother named Shabaka. He will be my successor after I have passed away:(
WRITTEN BY KING PIYE
​ 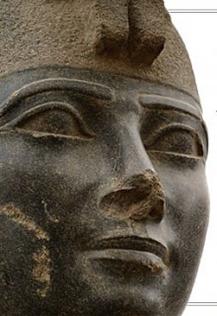 Genesis 13:1
And Abram went up out of Egypt, he, and his wife, and all that he had, and Lot with him, into the south.

South of Egypt is Sub-saharan Africa.

Genesis 25:12
Now these are the generations of Ishmael, Abraham's son, whom Hagar the Egyptian, Sarah's handmaid, bare unto Abraham:

So the original Arabs are also Black, since Hagar is an Egyptian .