JUST A LITTLE WHILE

From the book Black women in white america:

Ida B. Wells Barnett (1862-1931) Was born in Holly Springs, Mississippi, the eldest child of slave parents. She was educated at Rust College. When she was fifteen years old, her parents and a brother died in a yellow fever epidemic. She concealed her age, secured a position teaching school, and became the support and substitute parents for he five surviving brothers and sisters. in 1884 she moved to Memphis Tennessee, where she worked as a schoolteacher and continued her education by attending classes at Fisk University. During this time she began to write articles for black newspapers under the pen name "Iola." In retribution for her exposure of the inadequate school facilities for black children, she was fired from her job in 1891 She then began a full time career in journalism and and soon became one of the two owners of the Memphis Free Speech.

Her hard-hitting columns were marked by race pride and urgent appeals to black resistance against discrimination. In 1892, three black men, all personally known to her, were lynched in Memphis. Ida Wells charged in her paper that the motives for the lynching were purely economic- all three men having been successful in business. She also urged the black population of Memphis to emigrate to the West.

This case became a turning point in her life. While she was on a business trip in the East, the offices of her paper were destroyed and her life was threatened if she were to return. She then began her one woman crusade against lynching-lecturing, writing and organizing. Her approach was hard hitting. She gathered the facts, using the services of detectives, Pinkerton  agents or informants, then exposed them to all who would hear, laying bar​e the politics and economics of lynching. Her contention was that lynching was an integral part of the system of racial oppression, and that the motives for lynching usually had little to do with crime, but were either economic or political. She dare to bring out into the open what was the most taboo subject of all in Victorian America-THE HABITUAL SEXUAL ABUSE OF BLACK WOMEN BY WHITE MEN AND THE MYTH THAT THE ONLY SEXUAL CONTACT BETWEEN WHITE WOMEN AND BLACK MEN MUST BE BASED ON RAPE.

PRAYER TO IDA B WELLS BARNETT

Hear our prayer, attend to your

people down here we need

your guidance and help. The

lynching now have been with guns.

Remove the fear away from Black men

who are not afraid of killing each other

but turn the other cheek towards white men.

Some Black women  now have turn their bodies

other to white men. This was not the reason

for the struggles. They have taken the

Bible verse too literally when it states

to love your enemy. They then became

an enemy to themselves. We must

14 Every wise woman buildeth her house: but the foolish plucketh it down with her hands. 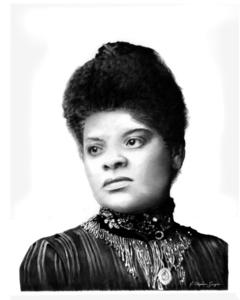